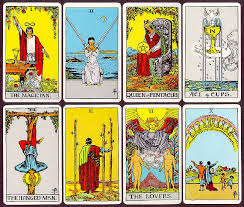 
My name is Tina and I am a Psychic Tarot Card Reader since 2003. My background is BSc Hons Psychology and I was previously a practising Aromatherapist and Reflexologist. I give trusted readings about love, relationships, career, money, future happiness and success. Please do contact me for a tarot card reading.
History of Tarot Cards:

Although the Romani people are often referred to as "Gypsies" (and prefer to be called by their more proper designation, Roma), not all "gypsies" or nomadic peoples are Roma. Gypsies have always been known to be fortune tellers. The Roma are descendants of the ancient warrior classes of Northern India, particularly the Punjab, and they are identifiable by their language, religion, and customs, which can be directly linked to those of the Punjabi in northern India. I am a Hindu Punjabi from Delhi which is northern India and my caste is Khatri- the warrior. I am by this definition of Romani origin perhaps a modern day age gypsy who is educated. I have always felt since I was small that I was able to see many things people were not able to see. I looked more like a gypsy in my younger days. However coming from an educated background, I wanted to do the degree in Psychology to increase my understanding of people's emotions and reactions in the scientific sense. I was already reaching out using my psychic senses. I always knew when someone was using or cheating me as my gut feelings were very strong. I would not be easily duped.

Former Indian Prime Minister Indira Ghandi summarized the state of the Romani people very nicely in her opening speech at the International Romani Festival in Chandigarh, India on October 28, 1983. It is paraphrased below (by Milena Hubschmannova & Jaroslav Jurasek):

"There are some 15 million Roms dispersed across the world. Their history is one of suffering and misery, but it is also one of the victories of human spirit over the blows of fate. Today the Roms revive their culture and are looking for their identity. On the other hand, they integrate into the societies in which they live. If they are understood by their fellow citizens in their new homelands, their culture will enrich the society's atmosphere with the colour and charm of spontaneity."

I use The Rider Waite Tarot Cards to do my tarot card readings and its history is discussed below.

Arthur Edward Waite (1857 - 1942) was a scholar of occultism and a leading member of the Order of the Golden Dawn. He collaborated with a young artist, Pamela Coleman Smith. She designed according to his instructions a set of Tarot cards which have enjoyed universal acclaim ever since their first publication by Rider in 1910. The rich figurative designs, with their precise and many-layered imagery, have helped people all over the world to understand and enjoy the unique language of the Tarot.

I receive messages and information from my Angels and Guides to answer your questions.
The Rider Waite Tarot cards- World Famous have 78- card deck, with the traditional Tudor rose that was a feature of the first 1910 deck. Pamela Coleman Smith was born 16 February 1978 in Middlesex England of American parents. Her childhood years were spent between New York and Jamaica. Pamela despite occasional art shows and favourable reviews by critics, the continued slow sales of her works and rejections by commercial publishers left her deeply disappointed. Smith never married. She had no known heirs except for an elderly female companion who shared her flat. She died on 18 September 1951, penniless and obscure. Much of her work has never been found. Pamela Smith would be all but forgotten except for the 78 tarot paintings known as the Rider-Waite Tarot Pack. She would be astonished and gladdened to know that today the deck touches the hearts and emotions of millions of people.

In order to do the Tarot Readings I need pin drop silence so that I can hear the angels say what they want me to tell you. Bring any item of clothing or jewellery that belongs to your loved one. This can give me more insight in your loved ones and your relationship with them.
Tina Sawhney - Psychic Tarot Cards Reader
www.tarotcardsreader.co.uk